NEW YORK – September 24, 2018 – The value of new construction starts in August decreased 9% from the previous month to a seasonally adjusted annual rate of $741.9 billion, according to Dodge Data & Analytics. The August downturn for total construction starts matched the 9% decline reported for July, as activity in the latest two months pulled back after the sharp increases in May (up 14%) and June (up 10%). By major sector, weaker activity was reported in August for nonresidential building, down 19%; and residential building, down 7%. On the plus side, nonbuilding construction in August advanced 6%, reflecting a steady performance by public works as well as improvement for electric utilities following depressed activity earlier this year. During the first eight months of 2018, total construction starts on an unadjusted basis were $540.0 billion, up 1% from a year ago. The year-to-date performance for total construction was restrained by a 45% drop for the electric utility/gas plant category. If the electric utility/gas plant category is excluded, total construction starts in this year’s first eight months would be up 4% compared to the same period of 2017.
The August data produced a reading of 157 for the Dodge Index (2000=100), down from 173 in July. During the previous seven months the Dodge Index averaged 170, with this year’s high of 190 reached in June while the low of 152 took place in April.
“The pace of construction starts weakened substantially in August, but remained within the range of activity witnessed so far in 2018, admittedly at the low end,” stated Robert A. Murray, chief economist for Dodge Data & Analytics. “For nonresidential building, the boost coming from very large projects in August was not as strong as what took place in late spring, even with the August start of such projects as a $520 million office building in Sacramento CA and a $500 million hospital expansion in Cincinnati OH. Accordingly, it would be too early to say that nonresidential building has already peaked and is now retreating, given the volatility that arises in the monthly data from the presence or absence of very large projects. Market fundamentals affecting commercial building such as occupancies have yet to weaken discernibly, and funding for such institutional projects as school construction remains supportive. For residential building, multifamily housing appears to be easing back in a broad sense from the strength shown earlier in 2018, and a similar pattern could be emerging for single family housing. Even so, on a year-to-date basis, residential building continues to register growth. As for public works, it’s still on an upward track, helped this year by increased construction starts for highways and environmental projects like storm sewers, while pipeline and rail transit projects are staying close to the brisk pace reported in 2017.” 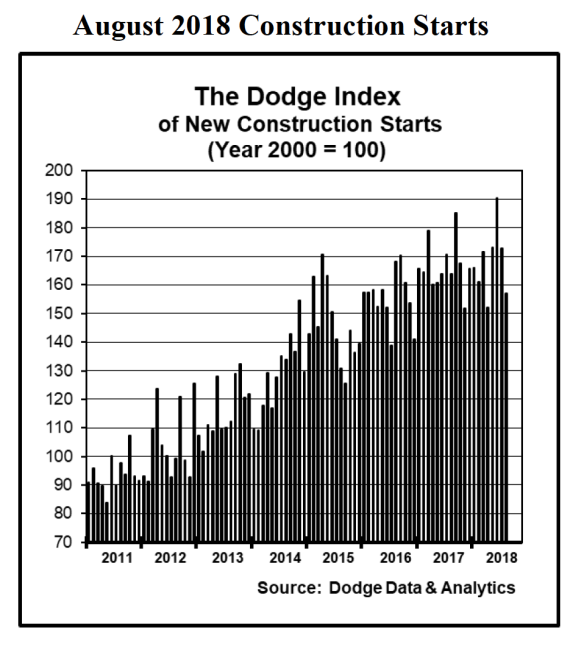