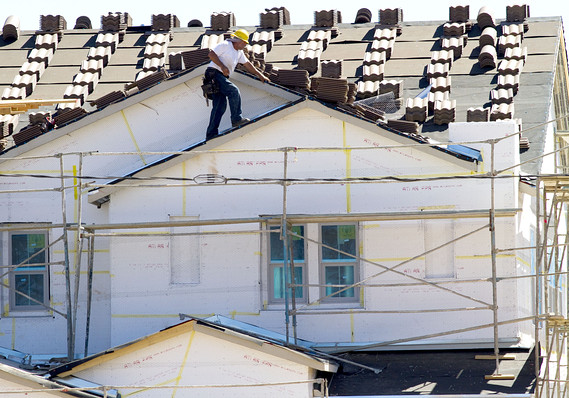 A construction worker works on a new home for developer KB Home in Valencia, California.

The numbers: U.S. home builder confidence fell two points to 64 in June, as measured by the National Association of Home Builders’ index. That missed the consensus forecast of a one-point increase.

Any reading over 50 signals improvement.

What happened: Home builder confidence slid throughout 2018 as the housing outlook darkened, but seemed to be perking up, along with the broader market, earlier this year.

In June, the gauge of current sales conditions dipped one point to 71, the tracker of sales expectations over the coming six months fell two points to 70, and views of buyer traffic declined to 48 from 49.

Big picture: Economists have historically looked to NAHB’s index for clues on the future pace of home construction. But that relationship has broken down in the aftermath of the housing bust following the 2008 financial crisis. Builders have been reasonably confident, but have started far fewer homes than in previous points in history. In fact, consumer demand for homes is so robust that sentiment and construction should both be much higher.

The sub-gauge of buyer traffic has been higher during this cycle than during the housing bubble years, even as sustained lower-than-normal levels of construction have left us with a shortfall of several million homes, according to some economist estimates. (More on the buyer traffic conundrum can be found here.)

What they’re saying: NAHB and other industry groups have for years blamed a number of headwinds for lackluster sentiment and tepid pace of building: the cost of labor and land, primarily. When the Trump administration started to flex its trade policy muscles, the industry added the cost of lumber, inflated by tariffs, to that list. On Monday, the group also called out “excessive regulations” for the downturn in confidence.

Market reaction: They’re not the only ones convinced that builder stocks are a good buy. Investors have sent shares of LGI Homes Inc. LGIH, -0.88%   more than 60% higher since the start of the year, and shares of KB Home KBH, -1.83%   nearly 39% higher in that period.